Wollaton Park is a large park home to a variety of wildlife, including two herds of wild deer, 90 Red and 120 Fallow, as well as other wildlife.

Calving season happens to the deer between May and July.

It is a very sensitive time for our two species of resident fallow and red deer, especially for the females as they give birth to their young.

Female deer will give birth in areas of long vegetation where the young deer will remain hidden for a few weeks, whilst the mother will keep an eye on it from a distance. The mother will return in short bouts to feed the young with milk. It is during this time the female deer will be very protective, and will sometimes approach dogs and dog walkers instinctively to protect their young ones, even if the dog is on a lead and seemingly behaving itself.

It is because of this unpredictable behaviour we give the following advice, for the protection of the deer, visitors but also your dog: 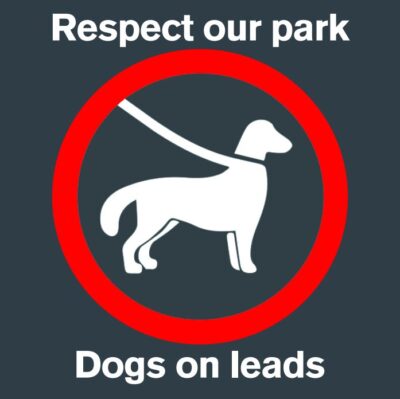 • Remain close to paths, avoid long grassy areas and being close to the perimeter of the golf course
• Keep a safe distance from the deer (50 metres)
• Keep dogs on leads throughout the park
• Consider walking your dog elsewhere
• If a deer charges towards you, let your dog off the lead so it can run away
• Owners of dogs worrying the deer may receive a fine of up to £1,000 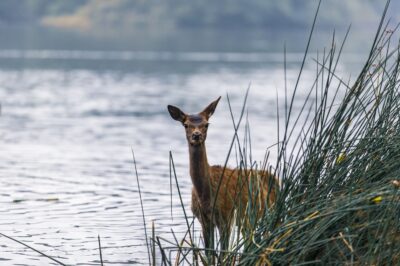 Advice to All Visitors

• Remain close to paths and avoid long grassy areas
• Keep a safe distance from the deer (50 metres)
• Do not touch or approach young deer if found, mother will be nearby. 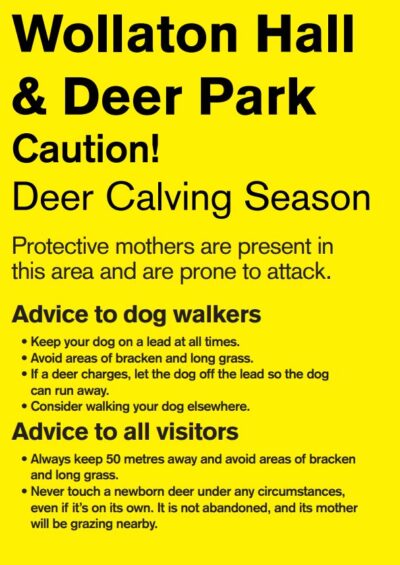 Guidance in the park

We have a number of signs throughout the park indicating guidance at notable areas to visitors & dog walkers.

We encourage all visitors to keep an eye out in notable areas with these signs, though also to be mindful of the guidance generally throughout the entire park, as wild deer roam freely throughout Wollaton Park.